Researchers in Italy developed a clear way of exploring differences in autoantibodies to predict which scleroderma patients are likely to develop pulmonary arterial hypertension (PAH), improving their chances of getting appropriate treatment before changes in their lung blood vessels take place.

The study, “Subspecificities of anticentromeric protein A antibodies identify systemic sclerosis patients at higher risk of pulmonary vascular disease,“ published in the journal Medicine, showed that dissecting the structures that certain autoantibodies bind to reveals why some patients develop the deadly lung disease while others, with the same antibodies, do not.

Early treatment of PAH can prevent its progression, but the diagnostic process is slowed by the lack of markers indicating risk for, or early presence of, the disease.

Studies in different populations have shown that an inability to diffuse carbon monoxide well through the lungs (a test called DLCO, measuring lung function) and high systolic pressure in the lung artery often precede PAH development.

In scleroderma, the presence of antibodies against CENPs (centromeric proteins) has also been linked to an increased risk of PAH, but only about 10 percent to 20 percent of patients with these antibodies develop the disease.

CENPs exist in two forms, CENP-A and CENP-B. In earlier studies, the research group at the University of Bari Medical School showed that neither of these forms could predict PAH development, possibly since patients usually have antibodies to both.

In the new study, the team focused on CENP-A in 84 scleroderma patients who had been ill for an average of 15 years. With the help of a new assay, the team showed that antibodies against CENP-A could be divided into different subgroups that bind to slightly different types of protein pieces, or peptides. These different antibody subtypes were also seen to differ radically in how they related to disease characteristics. While one type was linked to increased lung artery pressure, another type was linked to lower pressure. The two antibody types could also predict the severity of lung disease in patients, but again, each showed opposite associations.

Adding DLCO scores to the analysis showed that the antibodies still provided a better prognostic estimate than lung artery pressure and DLCO alone.

The research team then calculated the ratio between the two antibodies, and identified a cut-off value that separated patients into two groups: those with high lung artery pressure and those with low pressure.

“The ability to identify these at-risk patients can contribute to clinical efficiency and effectiveness. Further research into the peptides expressed (…) may reveal the molecular mechanisms that put some anti-CENP-A-positive patients at greater risk than others for pulmonary vascular disease,” the research team concluded. 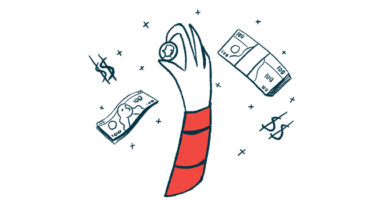