Actor and TV show host Terrence J. has been named celebrity ambassador for the Pulmonary Hypertension Association (PHA)’s 25th anniversary celebrations this year. Terrence J. has a fan base of nearly 2 million followers on Twitter, and by using social media to raise awareness and educate his fans about pulmonary hypertension (PH), he expects to help the PHA save lives.

Terrence J. recently left “E! News” to concentrate on his acting career, and is now starring in “The Perfect Match,” a romantic comedy under the production of Queen Latifah and Flavor Unit that will open in U.S. theaters starting on March 11. He has also written an autobiography, The Wealth of My Mother’s Wisdom: The Lessons That Made My Life Rich, detailing lessons given him since childhood on the importance of perseverance and positivity to a happy and fulfilling life, and of being a leader by example. 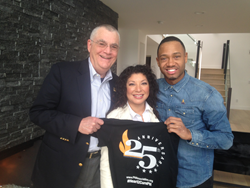 His participation in PHA’s celebrations as a celebrity ambassador will include:

PH is characterized by increased blood pressure in the lungs due to the narrowing of the pulmonary arteries. Affecting children and adults, symptoms include shortness of breath, fatigue, and chest pain. PH is often mistaken for asthma or other less severe diseases, resulting in delayed diagnosis and treatment. The condition is also associated with a series of other illnesses, such as scleroderma, lupus, sickle cell anemia, and HIV.

Over the past 25 years, the PHA said in its release, notable progress has been made in patient care, including 14 treatments approved by the U.S. Food and Drug Administration (from zero in 1991), PH research commitments totaling $17 million, PHA accreditation of more than 24 PH care centers throughout the country, and the establishment of a patient registry that is set to play a pivotal role in future patient care and research.