First in a series.

Those in the pulmonary hypertension (PH) community often refer to each other as PHamily. They don’t live under the same roof, but they do have a strong understanding of what life is like for other patients and caregivers: endless doctor appointments, hospitalizations, procedures, and surgeries. Their metaphorical DNA comprises PH symptoms, treatments, and side effects. They share similar frustrations, heartbreaks, and anxieties but are often stronger than they look.

The PHamily resemblance isn’t just blue lips caused by lack of oxygen in the blood, flushed skin enhanced by vasodilators, or fatigued appearances from overworked lungs and hearts. No, their most admirable shared trait is the mental muscle they flex every day as they fight not only to survive but to thrive.

Together, PHamily doesn’t just celebrate birthdays but accomplishments, too. They are thrilled when PH odds are beaten, and quality of life exceeds expectations.

PHamily is close-knit but let us not forget our distant cousins — those living with other rare conditions. My work with BioNews, the publisher of this website and many other rare disease sites, has enhanced my respect for and deep connection with this extended family. Other rare diseases might not mirror PH but it’s easy to recognize similarities.

My son Cullen and his friend Cassidy Huff are perfect examples of how easily bonds can form between people living with different diseases. Cullen had PH and Cassidy has Conradi-Hünermann syndrome. They met through the Make-A-Wish (MAW) Foundation while paying it forward: Both were so grateful for their granted wishes that they offered their time to MAW fundraisers. Cullen and Cassidy first met at the Walk-For-Wishes event in August 2009. They were the featured “Wish” children that day and shared the honor of cutting the ceremonial ribbon to start off the walk. (The featured image for this column is from that walk.)

Their paths often crossed when they received medical care at the same hospital. Cullen was usually battling a PH crisis and Cassidy was often recovering from one of the 43 surgeries she has had in her lifetime.

As I mentioned, Cassidy has Conradi-Hünermann syndrome, which is a form of dwarfism. She is 4’3″, blind in her right eye, deaf in her left ear, and her entire right side is just under 5 inches shorter than her left. Like people with PH, Cassidy has co-existing conditions. Hers consists of kyphoscoliosis (which means her spine bends and twists) and a skin condition called ichthyosis. Also relatable to those with PH is that she has a restrictive lung disease, which often makes her feel out of breath.

But like so many living with serious medical conditions, Cassidy wants none of these perceived limitations to define her. This 18-year-old overachiever has accomplished so many things in her young life that I find it inconceivable that anyone would acknowledge her as anything other than a shining star. She has been setting the world on fire since the age of 4. Cassidy is an accomplished singer-songwriter, actress, voiceover artist, bestselling author, and disability advocate. Her achievements are too many to mention, so I will highlight several that stand out to me the most.

Cassidy has performed at almost all the major theaters in Seattle, Washington, recently coauthored a bestselling book titled “Becoming An Exceptional Leader,” will attend the American Musical and Dramatic Academy, and last but not least, plays a role in the animated DreamWorks original series “Spirit Riding Free: Riding Academy.” It’s available on Netflix if you are looking for something positive and inspirational to watch.

In the series, Cassidy is the voice of Eleanor Kimble, a disabled horse rider. She proudly describes her role as “the first actress in a wheelchair voicing a character in a wheelchair!” Cassidy wrote in an interview via email, “I am honored to help open up the conversation about disability representation in the media, television, and movie industries.”

Not everyone, myself included, can push through challenges to the extent that Cassidy has, but that’s not my point in sharing Cullen’s friend with you. Her accomplishments are impressive, but what stands out most is her ability to seek out joy and fit it into her life. 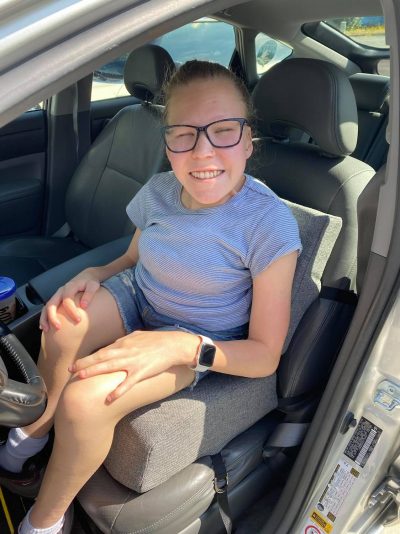 Cassidy is on her way to getting her driver’s license, thanks to the help of an upholstered seat. (Courtesy of Cassidy Huff)

Centerstage might not be your comfort zone but perhaps tending a garden would be? Maybe knitting or sewing a special gift for others would bring you joy? Writing, drawing, or painting are beautiful ways to share your voice. There’s cooking or baking and so many other options — big or small — that can provide joy. I hope you find yours!

Next week: Learn more about Cassidy’s friendship with Cullen, the challenges they’ve faced, and some advice based on their experiences living with a rare disease.